The history of Nathaniel Sumner of Brooklyn, New York stands as such:

Born on October 1st of 1964, Nathan Sumner was the son of a military man that would eventually rise through the ranks of the United States Marine Corps before retiring for something that wasn’t on the front lines of international conflict and a wartime switchboard operator-turned-personal assistant and housewife once the demands of a post-war nation died down. New York would be one of the many places that he called home both as their growing family moved around or as a military man himself, joining the ranks of the United States Army in 1982 which took him to basic training and U.S. Ranger training in Georgia only to be shipped off to the Middle East for the conflicts that were only growing there.

For twenty-one years, Nathan’s life was dictated by service with participation in conflicts through Lebannon, Iran and Iraq, Kuwait with Operation Desert Storm and Afghanistan with Operation Enduring Freedom; but that didn’t mean that there weren’t moments where combat situations weren’t the focal point of his life, and it was only a matter of time before something—someone—else caught his attention no matter the stacked off against her and any semblance of a normal life with a special forces operative.

Nathan met Lisa Tolliver in 1996 while on shore leave in San Francisco, little in the way of roots to speak of for Nathan to find himself back in New York City aside from visits to family still residing there. To say it was love at first sight would mean that he would have to believe in the notion, but there had been some level of falling through what few interactions they had, not only in that one instance, but those that followed; and in 1998, given the chance to do something quick and reckless and not entirely thought through despite the years there had been between their first meeting and correspondence that followed, he and Lisa Tolliver married.

A year later, between more times apart that was slowly driving a wedge between them without either particularly noticing it, she gave birth to their son, Tyler.

Understandably, it wasn’t easy; it could never be easy, and Nathaniel wasn’t a fool to think that going away for months at a time would be easy on his wife; but no matter their attempts to keep things together when duty called, there was simply too much distance between the soldier and his stay-at-home wife, constantly weighted by not only the worries about what was going on across the Atlantic, but raising a son by herself. They divorced in 2002 without much of Nathaniel’s say in the matter and the question of custody was easy when Nathaniel was never around and Lisa had only ever been for a son that would only come to butt heads with a father who was rarely in his life while growing up, causing him to miss out on those traditional milestones of life made for good old Americana Hallmark movies about growing up.

It hadn’t even helped in 2003 when Nathaniel turned away from his military career after those twenty-one years in the field, fighting the wars of politicians and government, and instead turned towards police work as a way to make use of what skills he did have. It became just as much a sink of his time when family life was in ruin, focusing on helping other people who needed it and growing his career, rising through the ranks of the San Francisco Police Department, rather than venturing into that far more personal side of his life – at least until he met Hannah Sumner who would eventually become that match made in heaven.

Familiar with the life of a police officer given the number of them who had been in her family over generations, Hannah was far more understanding of the work that Nathaniel put himself into even if it didn’t go without worry while he was on duty that something could go wrong. It happened before. It would happen again, and there was always that possibility that someone would be caught in an unfortunate situation; but it still wouldn’t stop them from having a life together, especially when she gave birth to their daughter, Hope, in 2004.

In 2017, Hannah passed, leaving Nathaniel with a sixteen year old daughter that was quick to become his pride and joy and the one person, above all else, he’d put his life on the line for–perhaps especially as super powered San Francisco came crashing into his own, aligning him with not only the mutant telepath and time traveler, Nathan Summers, but the Commission on Superhuman Activities, a top-secret government program that was developed to monitor, study, and handle super heroes, villains, and their affairs.

In some ways, it was the perfect fit for a former ranger and current police lieutenant trying to handle everything from burglars breaking into someone’s apartment to super villains trying to rob banks and unleash mass chaos on the city of San Francisco, but it did plenty to put him on the map.

The history of Nathaniel Sumner of Brooklyn, New York has been amended as such:

Born Nathaniel Sumner on October 1st of 1989, the man known as Nathan Prior served with the United States Army as a Ranger until relocation to San Francisco in 2017 following ten years of service. His position with the San Francisco Police Department, lasting until the Spring of 2020, coincided with the death of the then-lieutenant, Nathaniel Sumner, who took a fatal gunshot wound while on duty, moving Hope into the care of her aunt some years ago.

Though no foul play was suspected on initial investigation, only a handful of individuals would realize that wasn’t the case as Nathan stepped into the elder’s shadow with the same tell-tale characteristics–the same mechanical arm and glowing eye born of the techno-organic virus he was infected with by Apocalypse; the same telepathic signature of the would-be son of Madelyne Pryor and the mutant Cyclops; and an all-too-familiar penchant for high-powered weaponry and the knowledge of just where to find it, leading to only one conclusion only the C.S.A. knows the true motives behind.

Nathan Prior is Nathaniel Sumner. 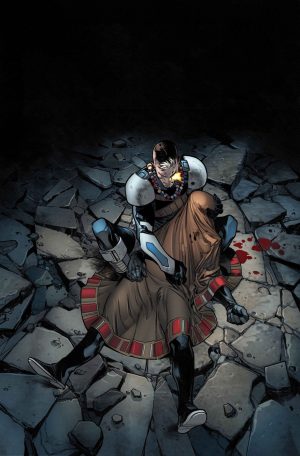 Before he became Cable, Nathan Summers was the infant son of Cyclops who was sent into the future for protection. As a child, Cable possessed a mild form of psionic abilities.

Later, Cable appeared as a man with mysterious roots. He first led everyone to believe that he was simply a man with cyborg parts. This characterization slowly changed into that of a mutant with robot parts. His character finally evolved into the child that Cyclops had sent into the future, revealing him as a mutant with techno-organic parts.

His first mission was ensuring Stryfe didn't interfere with the ascension of Cannonball as a High Lord. This storyline quickly ended without resolution when Marvel dropped the Externals concept. He was then simply leader of a team that defied Xavier's dream while continuing to fight for its own ideals.

After learning to suppress his Techno-Organic Virus, Cable gained nearly unrivaled power, which he used in an effort to make the world better. When he lost those powers, he then dubbed himself the protector of Hope Summers and brought her with him into the future for protection and eventually, he sacrificed himself for her benefit.

However, his paradoxal existence eventually brought Cable back into the fold when the X-Men from the past found themselves traveling through time. To combat Ahab and his Hounds who could irreparably change the timeline by killing one of the X-Men, Cable took matters into his own hands, slaying his older self and kidnapping the X-Men one-by-one to send them back to their own timeline.

MADELINE SUMNER • Nathan's biological mother, born in 1948 in Knoxville, Tennessee before her move to New York City upon dreams of becoming a songstress. She, however, became a switchboard operator for a short time before becoming a legal secretary.

NICHOLAS SUMNER • Nathan's younger brother, born on March 1, 1977. Unlike his father and brother before him, Nick took a different path in life than the heavy military upbringing suggested, becoming a medical examiner after a short time in the Air Force.

LISA TOLLIVER • Nathan's first ex-wife who wasn't a fan of his focus on his career rather than the family. They eventually divorced and she maintained custody of their son, Tyler.

TYLER TOLLIVER • His first born son, twenty years old, who he has little contact with much to his son's frustration.

HANNAH SUMNER • His second wife, deceased after a longtime battle with cancer. She is the mother of his youngest child, Hope, who currently lives with Nathan in San Francisco.

HOPE SUMNER • Nathan's sixteen year old daughter who he has raised since the death of his second wife and Hope's mother, Hannah. While she shows no signs of being a shifter, she is well aware of Nathan's dealings with the matter.

• Following his departure from the SFPD, Nathan currently lives in Oakland with Nathaniel Sumner's original accomodations sold sometime between 2017 and 2018 following his "death".

• Holds down a day job as a gunsmith and ballistics consultant for local law enforcement agencies since his official departure from the San Francisco Police Department officer ranks in 2020 given his counterpart's considerable knowledge of high-powered munitions.

• Has set up automatic payments out of an account under a ghost corporation to provide child support payments to his younger sister and Hope Sumner.

• Somehow got a "tattoo" on his left arm, Belle, which he can't remember the origins of, but given the A.I.'s penchant for changing pose, clothing, etc., there is always some sort of made up story for it.